The annual year end meeting of the Wilton League of Women Voters will be held virtually this year on June 11.  Lynne Vanderslice, First Selectperson and Wilton’s CEO and Chief Administrative Officer, will be the guest speaker.  All are welcome to attend.

This year marks the 80th anniversary of the Wilton LWV.  In spite of its schedule cut short by the COVID-19 pandemic, WLWV has had an active year and continues its nonpartisan efforts fostering voter services and education.  Together with several community organizations – the Wilton Library, the Wilton Historical Society, the American Legion, and the Greens at Cannondale, – as well as media outlets, Good Morning Wilton and the Wilton Bulletin, the Wilton League worked on presentations and programs to engage, increase, and heighten voter awareness.  This year, WLWV presented two evenings with candidates for key municipal board elections, a Breakfast with the State Legislators, and presentations on Wilton recycling efforts and town planning. It participated in the annual Wilton HS voter registration drive assisted by members of the Young Democrats and Young Republicans registering 93 Wilton high school students to vote.  General public service announcements concerning National Voter Registration Day and 2020 census were issued.  Advocacy efforts continued with WLWV member Pam Klem serving as Legislative Specialist for the LWVCT in election law and campaign finance.

The Wilton LWV was an active supporter of Wilton’s centennial suffrage celebrations and its programs included a lecture, The Movement was a Great Mosaic by Dr. Kelly Marino, “Booked for Lunch” book discussion of The Woman’s Hour with author Elaine Weiss, both co-sponsored with the Wilton Historical Society. A highlight was a viewing and panel discussion of the powerful film, the Hello Girls, co-sponsored with the Wilton Library and the American Legion.

The WLWV continued its annual Edna M. Jones Book Award to a Wilton HS student who has shown an outstanding interest in government.  This year the award was presented to Isabel Cronin. In addition, WLWV will sponsor WHS Social Studies teacher, Meredith Ramsey to participate in the Harvard Case Study Project, a pedagogical workshop at Harvard University.  Finally, a fond farewell was said to former Wiltonian Carole Young-Kleinfeld who worked tirelessly  in her passion for civic education and participation in many Wilton community capacities.

The League of Women Voters is a non-partisan political organization that welcomes and is open to all.  The longstanding organization not only encourages informed active voter participation in government, but also works to increase the understanding of major public policy issues. To attend the annual meeting, for future events and membership information, check the League website at https://wiltonlwv.org.

For more information, or to receive the Zoom link, please email This email address is being protected from spambots. You need JavaScript enabled to view it..

Working in the time of Covid-19 requires ingenuity and flexibility.  Therefore, the Wilton League of Women Voters is inviting you to our VIRTUAL May 13 Steering Committee Meeting.  As we look toward the 2020-2021 year, we seek individuals to assist as committee members and for other events and programs.  Requirements and times are flexible.  Please take the time to think of how can contribute. Details for the zoom meeting and job descriptions/needs will be dsitributed via email prior to the meeting.

A Book Discussion
The Woman's Hour:
The Great Fight to Win the Vote
by Elaine Weiss

For the first time ever, the Historical Society’s Booked for Lunch will take place via Zoom!
This program is co-sponsored by the Wilton League of Women Voters. All are welcome!

We are thrilled to be welcoming author Elaine Weiss who will lead the discussion.

"It's bracing to read Elaine Weiss's stirring, definitive, and engrossing treatment of winning suffrage in America, The Woman's Hour: The Great Fight to Win the Vote. Weiss brings a lucid, lively, journalistic tone to the story. Perhaps her greatest contribution is documenting the intricate, contentious element of racism that almost crippled the struggle. For that insight alone, The Woman's Hour is compulsory reading."
- Jean Zimmerman, NPR.org

The nail-biting climax of one of the greatest political victories in American history: the down and dirty campaign to get the last state to ratify the 19th amendment, granting women the right to vote.

The Woman's Hour is an inspiring story of activists winning their own freedom in one of the last campaigns forged in the shadow of the Civil War, and the beginning of the great twentieth-century battles for civil rights.

About Elaine Weiss
Elaine Weiss is a Baltimore-based journalist and author, whose feature writing has been recognized with prizes from the Society of Professional Journalists, and her byline has appeared in many national publications, as well as in reports for National Public Radio. Her long-form writing garnered a Pushcart Prize "Editor's Choice" award, and she is a proud MacDowell Colony Fellow.

Registration essential.
By email: This email address is being protected from spambots. You need JavaScript enabled to view it.

After you register, you will receive a confirmation,  Zoom session ID Code and information about submitting questions.

“To protect the health and safety of voters, poll workers, and the most vulnerable populations, it just makes most sense to extend the date out to August,” Governor Lamont said. “I appreciate the continued contact with Secretary Merrill, as well as all of our town clerks and registrars who’ve worked with us each step of the way through this crisis to respond and make necessary adjustments.”

“I support the governor’s decision to move the primary to August 11 to coincide with our state and federal primary,” Secretary Merrill said. “This date change will allow us to make it easier to protect the health and safety of voters and local election officials, prepare for the anticipated increase in demand for absentee ballots, save towns money, and let voters make their voices heard in the presidential primary process, all by holding one primary instead of two.”

Governor Lamont will sign an executive order later today authorizing the date to be moved. It will be publicly noticed and published on the governor’s website at that time.

WLWV and the Wilton Historical Society Present: "The Movement Was a Great 'Mosaic': Connecticut Women And Stories From The Suffrage Campaign" 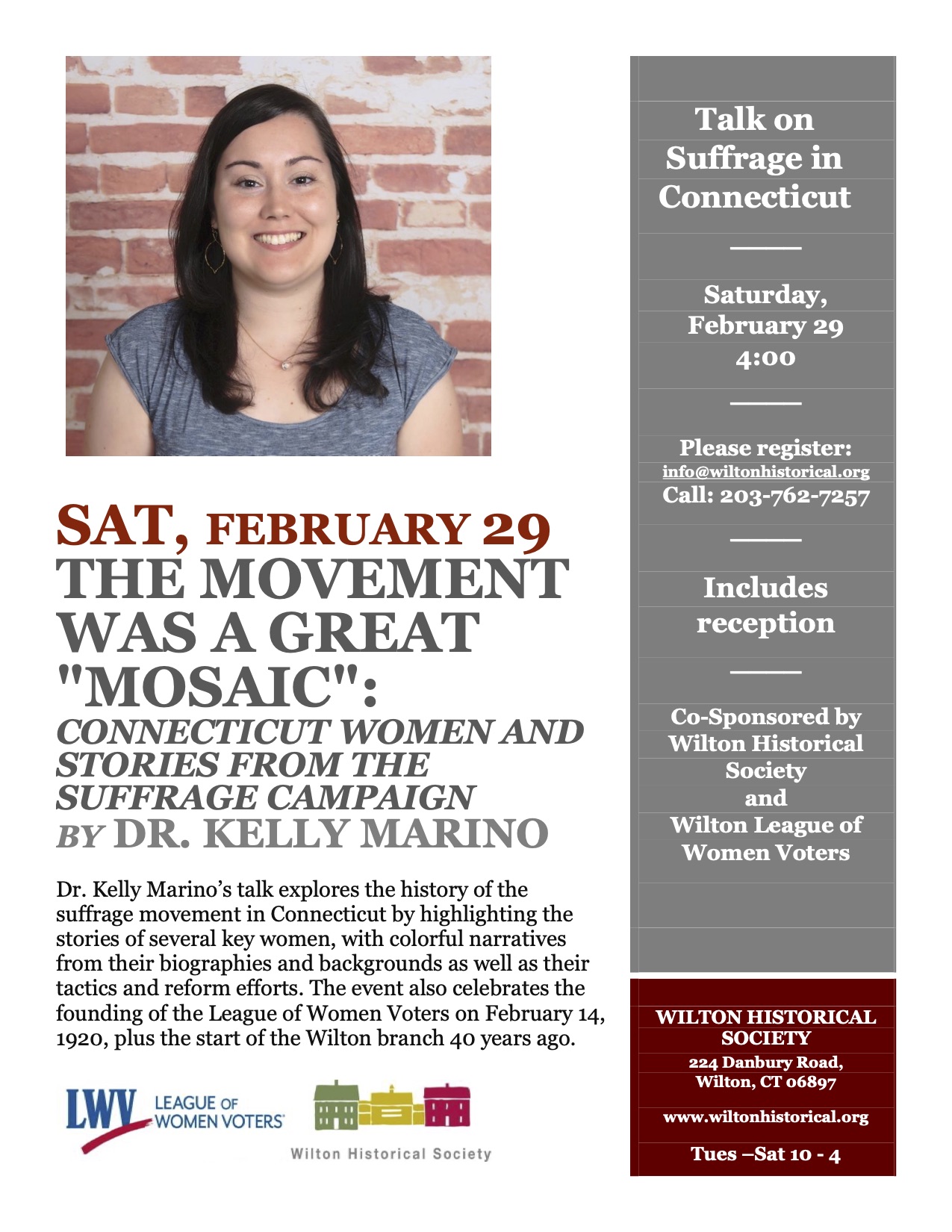