The Wilton League of Women Voters invites you to the 2019 Legislative Breakfast Saturday, February 9th, 2019 from 9:30-11:00 am at The Greens at Cannondale, 435 Danbury Rd, Wilton. The event will be held in the main dining room on the first floor. State Senator Will Haskell and State Representative Gail Lavielle will be in attendance. The WLWV will share their priorities for the legislative session and inquire where our legislators stand on pressing issues. We would also like to hear from Wilton constituents about what is important to them and we encourage the audience to come with prepared questions for the legislators.

There is no charge for this event. Coffee, tea, and pastries will be served.  The Greens assisted living building can be found directly behind the Wilton Meadows building. Please avoid parking directly adjacent to the building as these spots are reserved for residents and their families. We would like to thank The Greens for hosting this important community event.

Questions please contact Karen Silverberg at This email address is being protected from spambots. You need JavaScript enabled to view it. and put "legislative breakfast" in the subject line." Information about the League’s activities and membership can be found at wiltonlwv.org.

The meeting is open to general members and the public.

WLWV Submits Letters to the Editor Regarding 2018 Ballot Questions 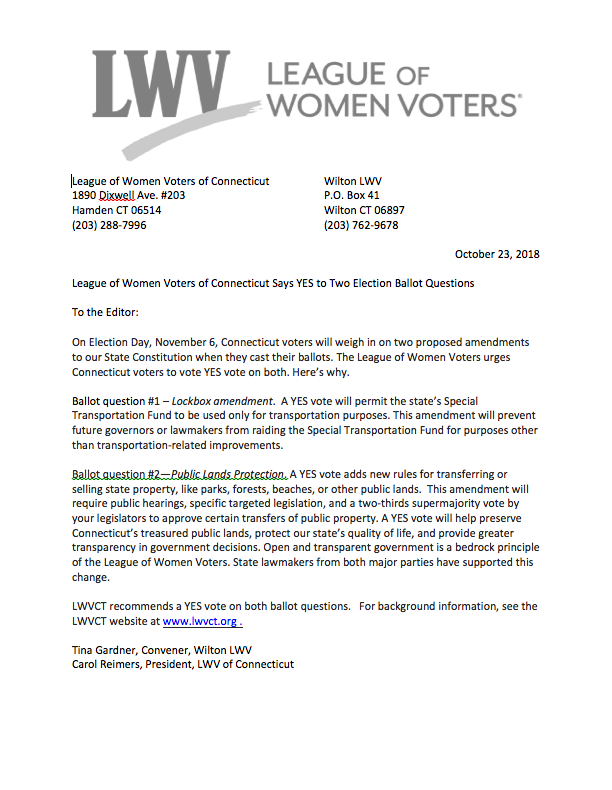 It was hosted by the Wilton LWV with support from the Wilton High School Model Congress.

Voter registration services were available prior to the event.

Join us for our next Steering Committee meeting Thursday, October 11 at 9:15 am at the Comstock Community Center, Room 31. Beginning at 10 am, Beverly Brokaw will provide WLWV with a preview of the proposed Wilton Blue Zone Program.

For those unfamiliar with the concept of Blue Zones, here is a brief explanation from the Wilton Blue Zones website: “A Blue Zone Community leverages the common principles discovered in Dan Buettner's reporting on the Blue Zones around the world - rare longevity hotspots. These areas include the Italian island of Sardinia, Okinawa, Japan, Loma Linda, California, Costa Rica's isolated Nicoya Peninsula, and Ikaria, an isolated Greek island. . . Initiatives focus on improving life in the place where you spend 90% of your time. They measure progress in terms of the quality of life enjoyed by our employers, schools, restaurants, grocery stores, faith organizations, and even in our homes. As an added bonus, Blue Zone Communities find that they attract both new employers and new residents who want to live in a community actively taking steps to ensure their health and happiness.”