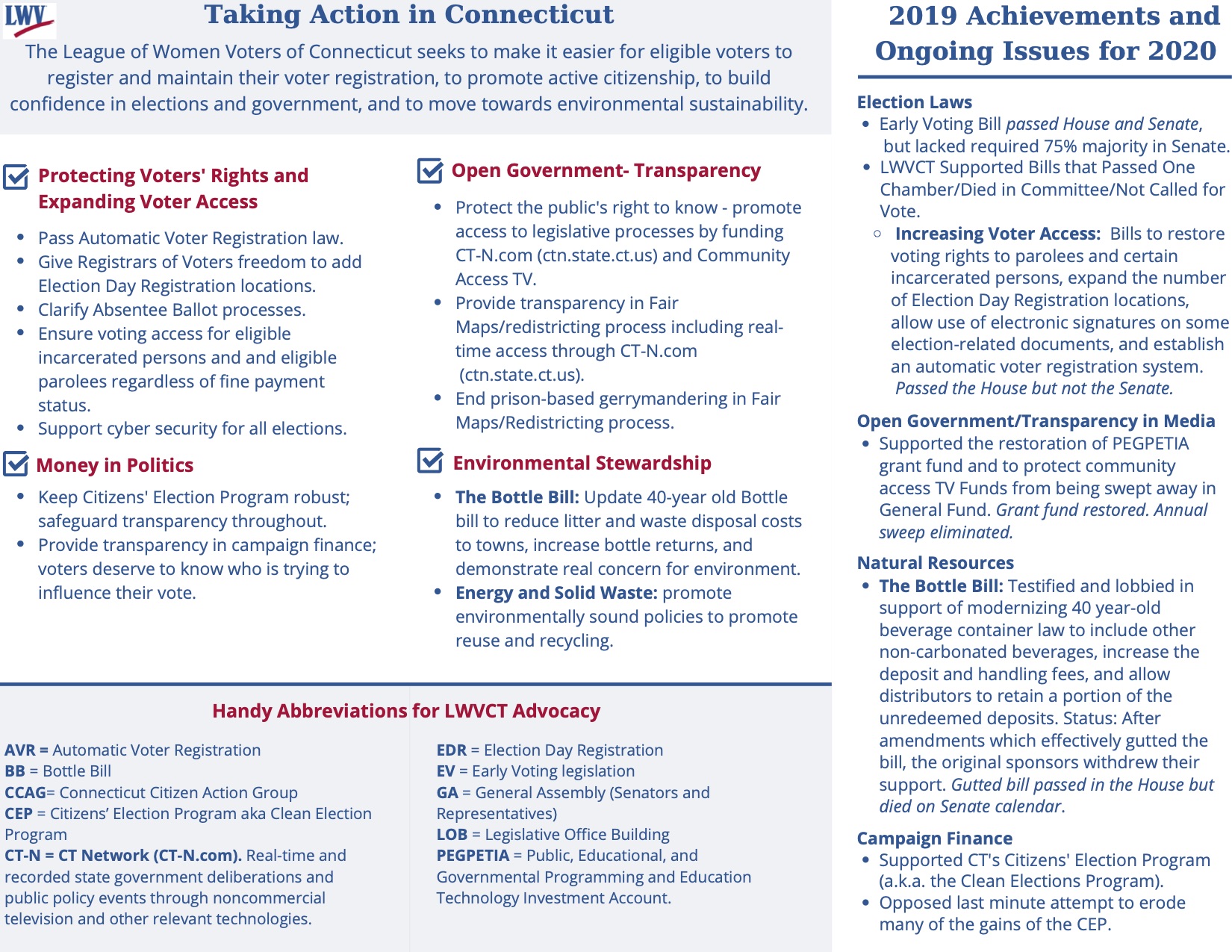 Where We Stand on Local Issues…

The following statements are brief summaries of membership consensus that were reached as the result of research and study by our local league.  Portions of the following positions have been achieved but full consensuses are maintained in the event of future change.  The LWV studies and complete consensus statements are on file at the Wilton Library.  The League supports measures to implement and/or maintain the following positions by making public statements, lobbying legislators, litigations, monitoring of local legislative bodies and citizen education.

Measures to encourage land use development that will preserve Wilton’s rural, open quality;

Providing a variety of housing types and densities to meet the needs of families of varying income levels and ages;

Flexible zoning techniques and the establishment of some multi-family (apartment and condominium) housing zones that would provide housing that would not exclude groups that need them most (elderly, retired, young, public employees);

Cluster housing as a means of moderating housing costs in large tracts of land and to preserve natural features such as wetlands, forests, and high ridges:

Expansion of Design Enterprise and Design Commercial zones in areas affected by the development both new and old Route 7 as necessary to maintain a balanced tax base to help offset the rising costs of town services resulting from population growth.

The Board of Selectmen having limited ordinance making powers;

The First Selectman maintaining his/her position as Chief Administrative Officer, recommending that if needed the Board of Selectmen should hire an Assistant/Manager;

Specific initiatives in the Charter that would provide the First Selectman with power to initiate hiring, firing, and the fixing of Town employees compensation rates, providing that the Board of Selectmen are informed of these initiatives and a vote is taken;

The term limit for the First Selectman and the Board of Selectmen should be 8 years;

Requiring petitions to have fifty valid signatures prior to submission.

Maintaining a permanent recycling facility for glass, cans and paper;

Participating in regional studies and solutions to insure proper disposal of waste.

Positions favoring coordination of plans determining usage and maintenance of town-owned open space land, considering the acquisition of more open space land, measures to provide a balanced program for teenage recreation, financing recreation programs by a combination of fees and taxes and exploring the possibility of using town-owned land for low intensity activities;

Including consideration of privately owned open space in future land use planning, including land which receives tax abatement under Public Act 490;

Finding ways for the Town to receive 10% land gifts from developers as either wetlands, land usable for a neighborhood parks, or equivalent funds;

The town taking an active role in protecting wetlands;

The concept of Merwin Meadows as the center of Wilton’s outdoor recreational program, enhancing the area to achieve a park-like atmosphere with improved landscaping, construction of a swimming pool, more frequent dredging of the pond and the construction of a picnic pavilion.

PROPOSED ROUTE 7 – In the early 1970’s the League studied the new Route 7 proposal in order to examine the impact the road would have on the community and the problems that would accompany its construction.  It was hoped that the town might be able to soften the effect of the road by early consideration of State plans for development and construction.

The following consensus was reached as a result of that two-year study.  The Wilton LWV supports;

Measures to deal effectively with the impact of the new Route 7 in Wilton;

Aggressive planning by the town’s agencies to preserve, as far as possible such essential amenities as:

A natural buffer of trees and/or open land along the highway to offset visual and noise pollution;

The natural appearance of the Norwalk River and pedestrian access to its banks;

Protection for the town and its citizens during the construction period.

The town’s hiring an administrative aid that could be the town’s representative in all matters pertaining to contracts and construction;

Forming a top level committee to meet with the State’s contractors on a regular basis;

Design changes of the proposed Route 7 through Wilton.

Immediate upgrading of the present Route 7 which would include improvements such as:

Improved intersections with the addition of turning and stacking lanes, widening where possible and improved sight lines

Improving mass traffic system throughout the corridor including improvement of the service on the Danbury bus system;

Keeping abreast of new developments for the usage of the existing road/rail beds.

Creating a bike path network throughout Wilton, including the establishment of paths along state roads;

Participating in the planning of a Linear Park with bike trails in the event of the construction of the new Route 7.

Because various proposals to town government for new and expanded programs frequently compete for the same land, tax dollar, or building space, choices among competing proposals should be based on a shared community vision of need and feasibility. The town must also evaluate these proposals in light of their impact on irreplaceable natural resources such as land, air, and water.   The League recommends:

that town leaders undertake a long-range planning project which will engage the community in the development of a shared vision of Wilton’s future growth, development, and resource management.

that a primary objective of the long-range planning project be the development of a prioritization and evaluation strategy that will facilitate the ranking of proposals in terms of town need and feasibility of implementation.

that the Board of Selectmen solicit citizen participation throughout the planning process, using professional assistance as needed.

that the town hold public meetings to review the proposed plan and priority list,  develop written guidelines to be used to evaluate new proposals, and publicize both the completed plan and guidelines.

that the town delay any development, or commitment to develop, town-owned centrally located property, such as Emery/Dana or Comstock West, until the above recommendations have been implemented.

A later start time for Wilton High School and Middlebrook School in order to offer Wilton students the opportunity to learn when they are most alert and to set a high priority on the health and safety of adolescent students.

A thorough BOE review of various strategies to implement a later start time while minimizing any related costs and effects on extra-curricular activities.

The Wilton League of Women Voters supports the Connecticut League’s statement of interest on Gun Violence Prevention. We urge the public to be conversant and active on this important topic.

The League of Women Voters first adopted a position on gun laws in 1990 and began urging Congress to control the proliferation of handguns and semi-automatic assault weapons. The LWV position also supports licensing/permitting procedures for gun ownership to include background checks, gun safety education and periodic renewals.  In Connecticut, LWVCT has supported strong measures to protect the health and safety of citizens through limiting the accessibility and regulating the ownership of handguns and semi-automatic weapons. LWVCT advocated for CT’s 1994 assault weapons ban, the 2007 law mandating the reporting of a theft or loss of a firearm, and offered testimony in 2011 supporting a ban on large capacity ammunition magazines.

Universal background checks on all gun sales and transfers in CT.